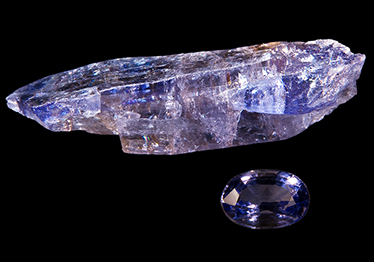 Tanzanite, also known as “blue sky” (a literal translation from Swahili), was originally discovered by the Maasai tribe when violent thunderstorms on the Merelani Hills set off bush fires that revealed beautiful blue stones on the ground. Having come from the sky and considered a sign from God for the African people, these gems became a sacred symbol for their country. Unable to accurately identify this stone, Tanzanite, was sent to the GIA (Gemological Institute of America) for analysis. It is in this emblematic research centre that this stone led to an even more fabulous discovery, it was classified as a Zoisite, a hitherto unknown classification.

Tanzanite, which is rare, historically significant and was discovered quite belatedly, is found exclusively in two deposits in Northern Tanzania, near Kilimanjaro on the border with Kenya. It is a genuine treasure with bluish tones.

Loved by many connoisseurs of exceptional gemstones, Tanzanite is also the birthstone for the month of December.

According to its mineralogical definition, Tanzanite is a transparent zoisite, which belongs to the Silicate family. This gives it a natural colour ranging from an azure blue to violet tones thanks to the presence of vanadium and chromium in its composition. As for its emblematic deep and intense blue colour, this colorimetric nuance comes from exposure to moderate temperatures (350° to 550°). This is why the gems formed in the rocks of the Kilimanjaro volcano proudly and naturally display the colour that is so characteristic of Tanzanite. Alternatively, the stones can also be industrially heated to obtain this coveted colour.

With a weight rarely exceeding 100 grams and due to harsh mining conditions in the depths of the earth, as well as a demand that is far greater than the supply on the market, this stone, which is rarer than diamond, is extremely expensive. A gemstone that is used for luxury jewellery, but also as an investment, a richly coloured one-carat AAA quality Tanzanite is worth between $300 and $425 per carat. For two carats, the price reaches 450 to 650 dollars per carat. From 3 carats, the price per carat rises to between $650 and $750. (September 2020 prices)

As a tribute to this African community, the Atelier Mariusse & Bonnet has designed the Maasai ring. As a symbol of femininity and a birthstone in its country of origin, this unique creation is paved with diamonds and three intense blue Tanzanites. With 3.40 carats of Tanzanites and 0.75 carats of FVVS diamonds, this “Haute Joaillerie” piece highlights the Atelier’s expertise in gemmology, but also the excellence of its jewellery know-how. In palladium white gold, the ring, with its elongated lines that fit the finger perfectly, boasts an elegant design inspired as much by African cultural motifs as by the art of French jewellery. A symbol of strength, courage and blessing, this ring is the perfect gift for a loved one.

To discover more details about this Mariusse & Bonnet creation: Maasai ring and to have more information about our French artisan workshop, do not hesitate to contact us at contact@mariusse-bonnet.com. Our entire team of jewellers will be happy to advise and assist you.

By continuing your visit to this site, you accept the use of Cookies. Accept Learn more
Legal notice
Necessary Always Enabled